A proposal on bended knee and a perfect September day for a wedding in a fairytale setting. What more could a girl ask for?

Photographs by Anna Rowland and Liz Armitage of Evoke Photography Uffculme girl Faye Barker is probably best known to TV viewers for her work on Five News and Sky News, during which she has interviewed a lot of Hollywood ‘A’ listers, including Robin Williams and Russell Crowe. But none, we dare say, holds a candle to the man she married in September last year. London boy Nick Jenkins is a design team manager in an investment bank in the city. Nick had known Faye since university days and they initially became housemates with a couple of other friends. “lt was only after Nick moved out that we realised our friendship was much deeper,” Faye said. “Ten years later we got married, so we took our time!”

Although brought up in East Devon, Faye now works in London as a freelance presenter and she and Nick were first brought together by a mutual friend, George Buckingham whom Faye had known at school in Uffculme and who was at the same university as Nick.

He ended up being Nick’s bestman so we Devonians have certainly made an impression on the London boy,” Faye said. “Although I now live in London, all my family still lives in the Westcountry so it was very important for me to come back to Devon to get married.”

And the evening Nick asked her to marry him is something that remains engraved on her heart.

“lt was 4 October 2006 and the day had been out of the ordinary for me from the start, as I was presenting Sky News Sunrise for only the second time, with Eamonn Holmes. After that I went to a screening of A Good Year as l was interviewing its star, Russell Crowe, the next day. My job isn’t normally quite as ‘showbiz’ as that so l was on a natural high when I got home. I suggested we went out for a drink at a local pub, little knowing Nick had plans up his sleeve.

“Anyway, after a couple of drinks we decided to go home and have some dinner. l thought something was up when Nick suggested we have a little stroll by the river because he’s not usually one for walks! It was a beautiful clear evening and we walked towards Teddington Lock and across a footbridge where we stood looking at the boats and the river. There were still a few other people about and some cyclists and I was starting to wonder why we were hanging around. Then, when the people dispersed, Nick knelt down on one knee and asked the question. It was a really great and special moment.

We now live a few minutes walk from that spot, so on 4th October this year l met Nick on the bridge after work, with a bottle champagne and two glasses so we could celebrate the anniversary. I’m really pleased that the place Nick proposed is somewhere l can revisit time and time again.”

Although a Devon girl, Faye wasn’t born here. “l was actually born in Hampshire, although the family moved to Holsworthy when l was four where my dad worked as a GP until he retired recently. My parents divorced in 1980, but both remarried and l was brought up my mum and my step-dad near Uffculme. Dad and my step-mum lived nearby and l spent many weekends with them. Consequently, like many couples now, we had multiple parents to contend with at the wedding and it was very important to us that each of them had a role to play. Dad gave me away in the traditional manner and gave a beautiful speech: my step-dad (who is a car nut) drove me to the ceremony at Bickleigh Castle in a beautiful old convertible Riley. “Like any mother, Mum was highly involved in the Wedding preparations throughout (especially the flowers, provided by Polly Thompson at West Country Wedding Flowers, because l don’t have much of a clue) and we spent many hours before the wedding collecting and drying rose petals for confetti – it was amazing how much we were able to accumulate at little or no cost, and something to be recommended.

“My step-mum organised the cake for us after meeting Sue Arscott from Devon Cake Box at a wedding fair in North Devon. We had a traditional cake but with a sponge as the middle tier since neither Nick nor I are keen on fruit cake, and a ring of chocolate cup cakes around the bottom tier with our initials on them.

“l didn’t consciously go for a colour theme, although it ended up being ivy, picking up on a motif on the stationery that a friend of Nick’s designed for us. As it is, the green went ideally with the teal-coloured dresses l had chosen for the bridesmaids – a colour that we also transferred to the ruches of the bestman and the dads.”

Picking the dress was something of a girls’ day out. “My friend and bridesmaid, Rosie Laydon, took me to a bridal shop to try on lots of dresses and after the session we had a pretty good idea of what style suited my figure, so it was a case of keeping an eye out for similar dresses. I ended up finding designer Allison Blake who had a dress made of Thai silk. When I put it on my mum Shed a tear so I knew I had to have it.”

When it came to choosing the bridesmaids’ dresses there was a bit of a surprise in store, as it turned out. “You probably won’t be able to tell from the photographs, but Rosie was actually four-and-a-half months pregnant at the wedding, and the dresses had been bought before she found out! Luckily, I had liked the dresses so much that l had bought one for myself. Being a size larger than Rosie, my dress fitted her exactly on the day, so nothing was lost.” 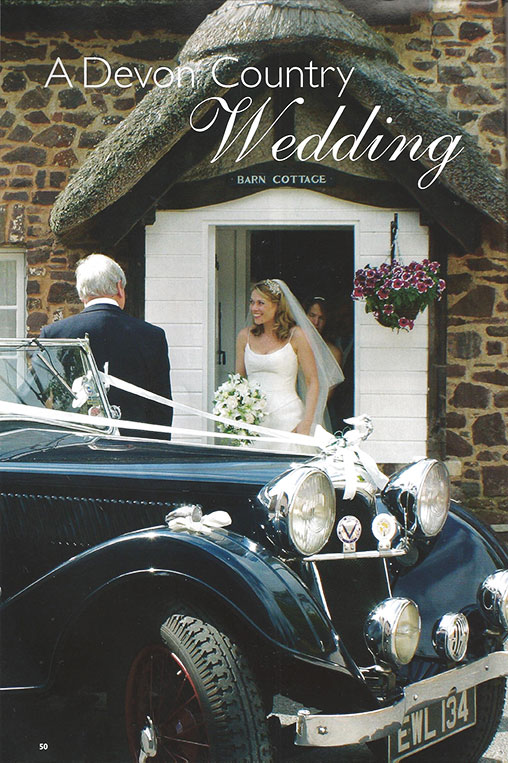 From Warehouse, the prom-style dresses were chosen specifically so that they could be worn again and were given a bit of a twist for the wedding by some hand-sewn crystal beads. Faye’s younger half-sister Becca was the other bridesmaid and her older sister Natasha broke with tradition and was an usher on the day in the same style of dress as the bridesmaids but in a different rich deep rose colour.

“l splashed out on my jewellery, which was made by a lady who lives near me called Gillian Million of the Million Design Company. She made both mine and my mum’s hair pieces, which are both unique. My hair piece was called ‘Labyrinth’ and was made of various old pearls, crystals and beads. Its organic look made me feel like a character from A Midsummer Night’s Dream.” It was certainly a fairytale locatio 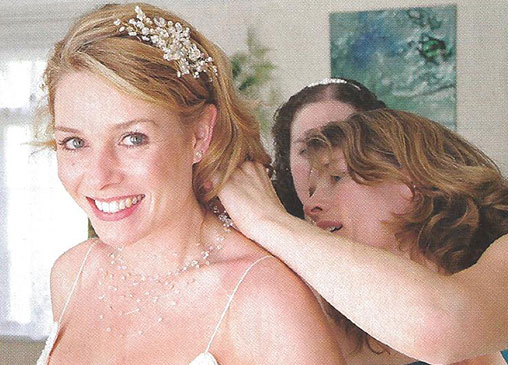 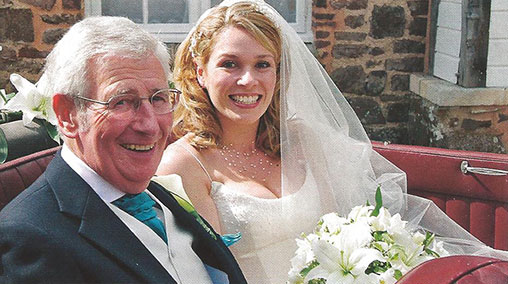 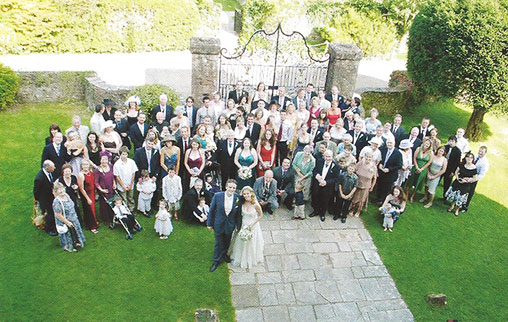 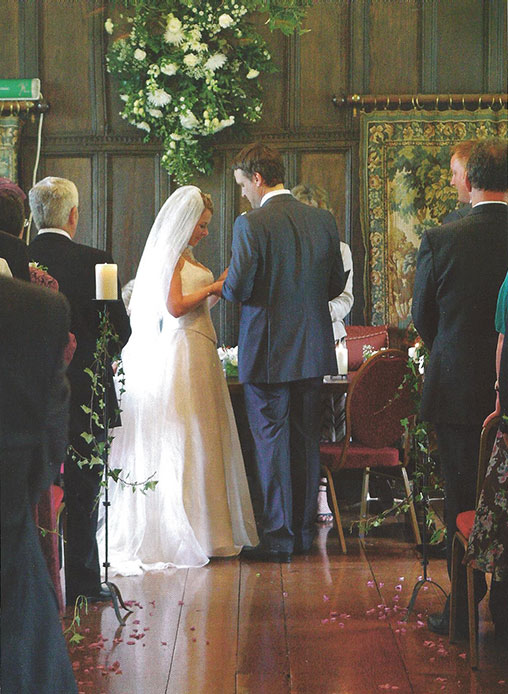 n, because the wedding took place at Bickleigh Castle and was followed by a blessing in the chapel.

The beauty of the location sold it to us. The owners didn’t really have to work very hard at all to persuade us. l spent the night in one of the cottages at the Castle, and as a lot of the guests were travelling down to Devon, we all met up at the Fisherman’s Cot on the evening before, treating the evening as part of the wedding itself. ”

The groom often takes a bit of a back seat when talking about wedding arrangements, but no less attention to detail went into kitting out him, his best man and ushers. “Nick was keen to wear something modern, so he and his best man wore Hugo Boss suits. Nick’s waistcoat and ruche were made of material which matched my bodice. l hunted down teal silk to match the bridesmaids’ dresses for the ruches and handkerchiefs for the best man and the dads. The ushers had lavender-coloured ruches and handkerchiefs made of material i had picked up in a sale at Libertys. The ushers and the dads hired navy two-buttoned suits from Cameron Ross – and we had some top advice from one of Nick’s ushers, Antony Jancic, who loves his clothes!” Nick says he found it quite important and great fun to have his best man and ushers around him whilst waiting for Faye in the Great Hall – something that he recommends all grooms should consider.

When it came to the wedding breakfast, Nick and Faye went one better than most and gave their guests a choice of three menus plus a vegetarian option. “lt was a lot of work on our part, but well worth it, l think,” Faye said, “and Bickleigh Castles chef, Scott Farr, is fantastic. The food was delicious and beautifully presented. Guests made their choice before the wedding and we reminded them of their choice on the back of their place cards. Amazingly it all worked and l didn’t hear of anyone who got the wrong meal.” Faye chose not to have favours for the guests, opting instead for a few foil-covered chocolate balls for each guest in a wine glass at their place setting, which worked well on a number of levels.

“We also bought some bubbles in mini champagne bottles, and bubbles could be seen floating around the room at the wedding breakfast.” The whole emphasis was on fun: Nick had worked out a quiz for guests to complete, drawing on early lives, which created a lot interest at the tables and got people talking. There were candles, flowers and photocopied images of family photographs around the lounge, friends provided music and readings at various stages throughout the proceedings, and Nick himself even wrote a poem, which was read out by his dad.

“lt was all quite theatrical really, but I come from quite a theatrical background anyway, and it made for a lovely ceremony.” Perhaps the only complaint that Faye has about the wedding is that the reportage by Liz Armitage and Anna Rowland from Evoke was so good that she is left with such a lot of great pictures she is struggling to decide which ones to put in the album – and this is four months on!

After a summer of wet weather, the weekend of the wedding beautifully sunny- a perfect weekend – and followed by a honeymoon to Kenya, Tanzania and Zanzibar. “We went on safari in Tanzania, which was amazing but a bit tiring. Luckily we had four days’ relaxation on the Kenyan coast beforehand and that would be my advice to anyone going on honeymoon straight after the wedding. Take time out to relax at the start of the and trip. You’ll need it to reflect on the day.”